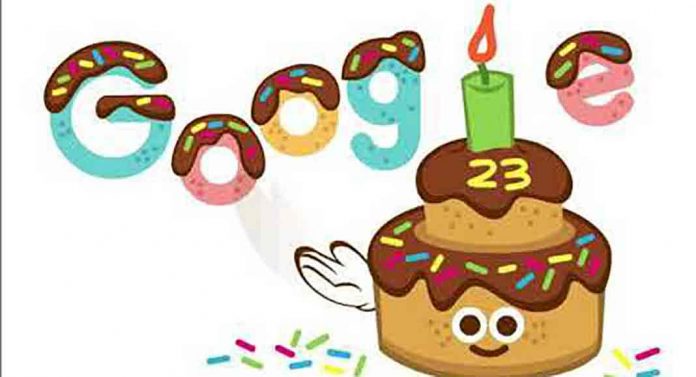 Two PhD students came up with the notion of building a prototype of a large-scale search engine 23 years ago. Their project grew into Google, the world’s most popular search engine. Today, September 27, is Google 23rd birthday, and the internet giant commemorated the event with an animated cake doodle.

“Every day, there are billions of searches on Google in more than 150 languages around the globe, and while much has changed from the early days of Google, from its first server housed in a cabinet built out of toy blocks to its servers now being housed in more than 20 data centers globally, its mission of making the world’s information accessible to everyone remains the same,” Google wrote in a blog post.

When Larry Page, 22 years old, and Sergey Brin, 21, met for the first time at Stanford University’s Computer Science department, they disagreed on practically everything. Page had just arrived at Stanford to pursue a PhD in computer science after graduating from Michigan University, and Brin, who was also a PhD student, was in charge of showing him around.

In the years between 1995 and 1996, Page and Brin developed a collaboration that would change the course of history. BackRub, an algorithm designed by the two of them, combed the web to comprehend its mathematical hierarchy and ranked web pages based on the number of reputable links directed at them.

The name “Google” comes from the mathematics term “googol,” which means “one followed by 100 zeroes.”

Page and Brin registered a domain name for their search engine on September 15, 1997. Previously, their search engine was consuming the majority of Stanford’s bandwidth. Google.com was the new domain name. Andy Bechtolsheim, the co-founder of Sun Microsystems, a computer hardware and software business that faced market competition at the time, wrote a $100,000 check to Google, which did not exist at the time.

Page and Brin incorporated the corporation in California on September 4 and opened a bank account in the newly registered company’s name to use Bechtolsheim’s check.

Susan Wojcicki’s garage in California became the new company’s headquarters. The following year, Wojcicki became Google’s marketing manager and is now the CEO of YouTube. From there, Google embarked on a meteoric rise to become one of the world’s most powerful technology companies.

Google now offers more than just its basic search engine, with products ranging from cloud-based productivity software like Docs, Sheets, and Slides to smartphone manufacturing like Pixel phones. Google has made substantial contributions to software technology and artificial intelligence research and development.

The IT behemoth has also recently made a big quantum computing breakthrough.